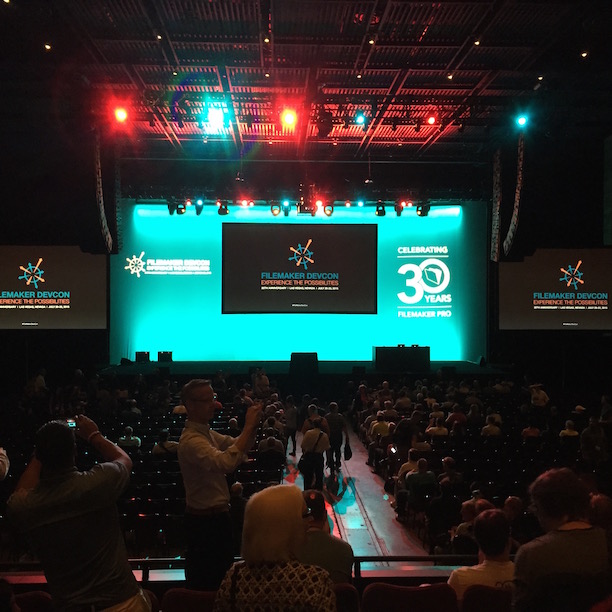 Gotta love Vegas. The keynote was held in a huge movie theater - that doubled as a live theater. All in the conference hotel!

I’ve been away from posting for a bit; my apologies. But I’d like to tell you about one of the reasons for my delay:

Great event. This year’s conference covered all sorts of milestones. It was the 20th DevCon. It celebrated 30 years of FileMaker. And it set a record for DevCon attendance – somewhere around 1,550 FileMaker developers from around the world gathered for three days of collaboration and learning.

This year’s event started to drift away from the last couple of years a bit, topically speaking. Whereas the focus of the last two years was very much on mobile and design, this year, the company started to move more in the direction of FileMaker as a platform for development and data management. This is in keeping with the wide variety of delivery vehicles FileMaker makes available – whether it’s the desktop client, the iOS device, the WebDirect technology that mimics the desktop client in a web browser, or the Custom Web Publishing technology. FileMaker, Inc., is increasingly seeing FileMaker as a platform from which companies can launch an integrated data management strategy across multiple delivery methods. Since development is dramatically streamlined by the new (as of version 13) WebDirect technology, the promise of seriously shortened development lifecycles is very tempting.

Version 14 was front and center, with several sessions demonstrating new and improved capabilities like the button bar, faster performance from WebDirect, and new functions and script steps. Let’s take a look at some of what I saw:

One theme that I tried to focus on in the sessions I attended was integration. FileMaker is becoming more and more an ideal tool for integrating different data streams from multiple sources. It was already good at this in years past, with tools like External SQL Sources (ESS), ODBC connectivity, Web Viewer objects, and multiple import / export options. However, recent developments like ExecuteSQL (the function), a huge variety of APIs and developer functions (most of which are free), and new functions and script steps like Insert From URL have opened up a range of new possibilities. It’s now very feasible to process web services, such as Google Maps or any of the other 13,000+ web services directly from a FileMaker database (with easily searchable parameters for your users, tied directly to a given record).

Another important topic is mobile. This is clearly a continued focus for the company, and they are supporting the mobile platforms with new support for WebDirect in mobile browsers and a host of new mobile-friendly features. (Watching a developer control a FileMaker database using a Bluetooth headset is … well, really cool.) So I tried to attend at least a few sessions focusing on mobile. (One of the things that kept me away from my blog was working on a new blended mobile / hosted solution for a client here in the Augusta area.) I got tips on workflows, design, and using some of the cool mobile-only features of FileMaker Go (like location capture, data capture, voice recognition … all kinds of great stuff). Want to take voice memos and have them transcribed? Piece of cake! Or how about a quick sketch of an area? Well, signature capture doesn’t just have to capture signatures, you know …

Other topics were covered, too. Like security. I attended a session by Steven Blackwell, generally considered to be The Guru of FileMaker security. (He’s written the white paper on security for the last several releases at least.) You’d be amazed what he finds in security audits. Or design. Albert Harum-Alvarez has an amazing mind for design – and a very gentle way of telling you your design stinks.

Wonderful, wonderful event. If you’re a FileMaker developer, I really encourage you to take the time to make it to a DevCon at least once, preferably once every few years. What you will learn is invaluable.

Meantime, here are a few photos from the event for your entertainment: