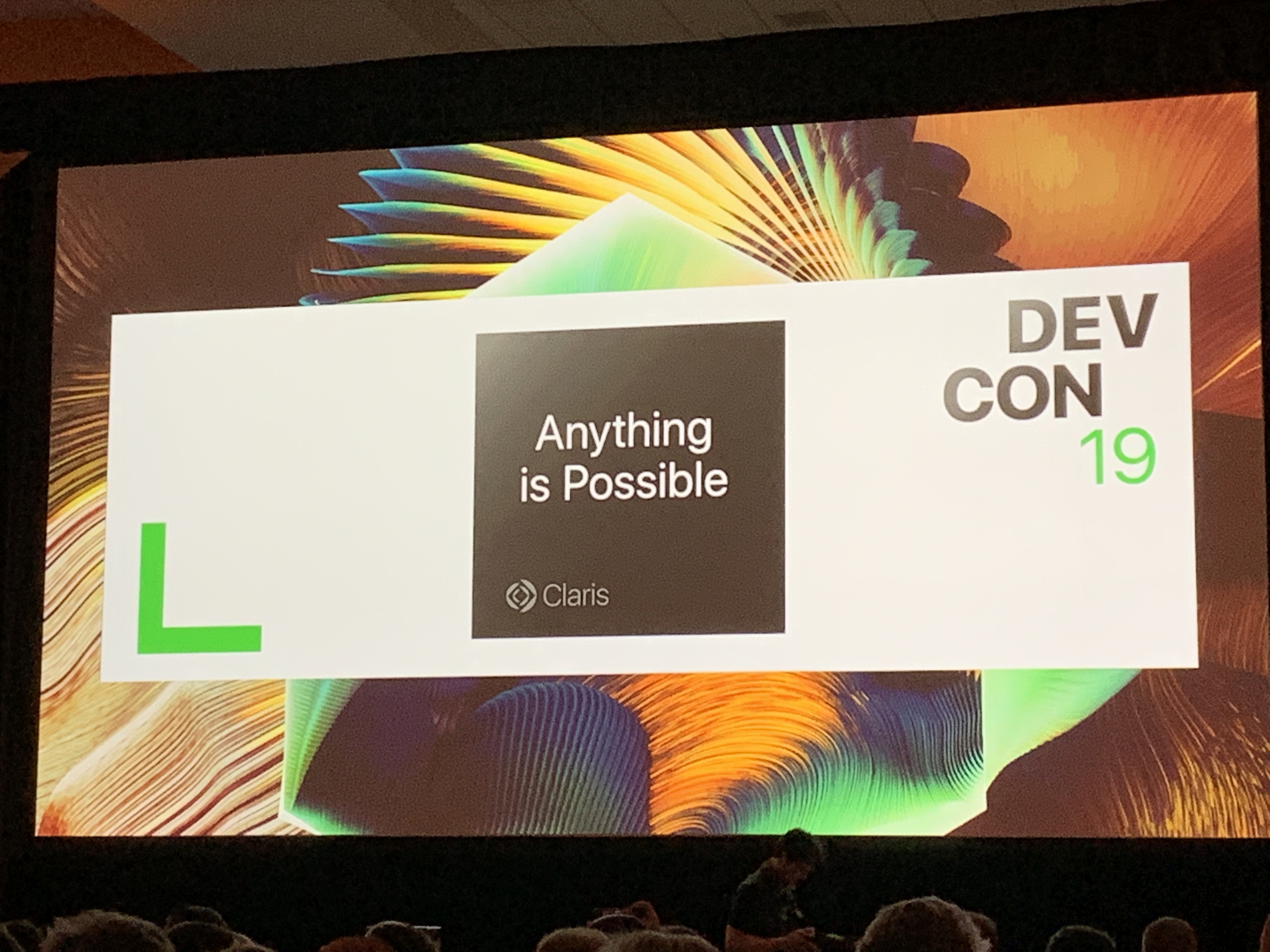 I attended the 2019 FileMaker Developer Conference, blissfully unaware at how much was about to change. It started with the keynote. New company CEO Brad Freitag dropped a bombshell: FileMaker, Inc. was changing its name. And I laughed out loud when I heard what they were changing it to.

Yep, that’s right; they went back to the company name under which FileMaker originally lived. (How’s that for a little nostalgia?) Honestly, I got a big kick out of it. I’ve been working with FileMaker since it was under the Claris name, and even got this little gift from a coworker who knew that at one point:

So there’s a completely new company logo and a revived company name, but the product will still be called FileMaker. (Whew. That makes it easier to keep my clients from being completely confused.)

The main reason they gave for the change was that they were moving from a single-product company to a multiple-product company. They’ve acquired a low-code platform called Stamplay, which will be rebranded as Claris Connect. It’s very similar to Zapier and similar tools, but I’m told by those who were in the beta group that it’s much more Filemaker-friendly. Quite useful, though, when you go to integrate various pre-existing services with your FileMaker solution. I know Zapier was a huge help for us when we integrated our InspectionAide application with the Inspection Services Network, as used by Hargrove Inspection Services. But it has some quirks that are a little painful; maybe Claris Connect will help there.

One thing about the conference this year was that they actually had three keynote sessions – and nothing scheduled opposite them. (I guess they really wanted everyone to attend.) The first keynote we’ve already talked about; it was Brad’s big announcement about the company being renamed. The second keynote was the so-called “Visionary” keynote, where they passed on the product roadmap and some other tidbits regarding

I’m not going to go into a lot of details about the sessions I attended. But I did learn some very interesting things. Tim Neudecker’s session on security made me feel vindicated. For years, NIST has recommended that passwords consist of upper and lowercase characters, symbols, not include patterns of common words, have to be changed every 90 (or even 30) days, and so forth. If you’ve ever lived in an environment like that, you know how painful it can be to keep your passwords in compliance. But recently, NIST basically came out and said, “Just kidding!” It turns out, the primary factor affecting password security isn’t complexity; it’s length. Further, making people change their passwords all the time – along with making them look like hieroglyphics – merely encourages them to write them down because they can’t be remembered. That’s how you get breaches. I’ve been saying the same thing for a long time, so I was glad to see that change.

Some other really good sessions I attended:

The rebranding focus made the conference feel a little thin this year. But all in all, it was another great DevCon. And it was the last. Beginning next year, the conference will be called Claris Engage to reflect the new brand and the broader focus.

If we can help you with anything FileMaker (or Claris!), please don’t hesitate to contact us. In the meantime, here are some more photos from the event. Happy FileMaking!